“Did you guys finish electricity?” asked a former student.

“Cool. Did you show them the hot dog cooker? I loved that!”

For years, the hot dog cooker has been one my students’ favorite demonstrations. I complete a circuit with a hot dog. Electrical resistance in the hot dog produces heat—enough to “cook it” in a little over a minute (students then sample cooked slices dipped in ketchup!).

Raleigh, a good friend and retired science teacher for whom I have a great deal of respect, questioned my decision to post such a video.

“I know it is out there without our help, but none of us ever wants a phone call from someone asking if we realize that child x hurt themselves because of our efforts. It’s more than the experiment.  The entire setup, under control of anyone other than a person with common sense and knowledge of electrical safety, becomes an invitation for a younger sibling to show off to a friend when responsible people aren’t looking.  The completed apparatus, left on a kid’s desk, is as dangerous as a loaded gun when other children might access it.”

Raleigh, and I (and others) debated this issue for several days. In the end, I opted to leave my video on YouTube.  I edited it to include a plea for students not to even ask a parent for help constructing a cooker unless the parent was an electrician.   I also shared this debate with my students. They seemed to appreciate the tricky nature of balancing the sharing of fascinating and important science with the need to keep folks safe. I felt comfortable with my decision to keep my video public. Then, in late April, Raleigh sent me the following article:

Morgan Wojciechwoski was electrocuted while attempting to make a Jacob’s Ladder. Apparently he based his efforts on a YouTube video. It’s not clear which video he watched (there are many); some do and some do not include clear safety cautions. According to reports, Morgan dreamed of becoming a scientist.

At this point, although I certainly feel for Morgan and all who knew him, I maintain my position on my hot dog cooker video. I will not give the excuse that there are already plenty of videos out there already as my defense. I cannot control others’ videos, only my own. Instead, I believe in being open and honest with students, and that knowledge leads to safety. That said, there are a number of fascinating demonstrations I will not share with students, nor put on YouTube. My fear with these demonstrations is that it would be too difficult for students not to hurt themselves if they tried to repeat them. I like to think in terms of “ beyond a reasonable doubt”.  I do not feel, beyond a reasonable doubt, that my students would remain safe if I shared these demonstrations.  So I don’t.

Which science experiments are “safe enough” to share? This is not a simple question; there are few absolutes in life. A student taking a standardized test might press too hard and snap a pencil tip. This shard could fly into a student’s eye. Still, I am unaware of any districts distributing safety goggles for test takers. A student could receive a dangerous burn or electrical shock while using a hot dog cooker (and this is far more likely than “test taker eye”). Here is one final thought on my hot dog cooker video. Would viewers be safer if I removed it from YouTube?  I believe the answer is “no” for two reasons. First, I focus on how it works not on how to build it.  Second, and more importantly, since I provide clear safety warnings within the video, my hope is that these warnings plant a seed of caution in the minds of my viewers if they explore other videos involving household electricity. 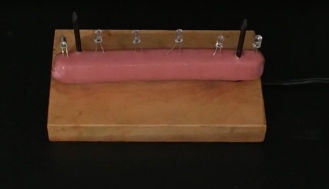 This, however, is not the last word. What are your thoughts?

A middle school teacher for 30 years (well, 29...), I love sharing ideas with other educators, and anyone else interested in science education. I particularly love building science devices of all kinds and creating YouTube videos. My YouTube channel is Douglas Stith, and my personal website is www.stithsonianscience.com. View all posts by stithscienceexchange

20 thoughts on “What Could Happen? or Safety First”