“Boredom” has only negative connotations, doesn’t it? Is this fair?

I drove from central New Hampshire to northeastern Ohio on the first day of my summer road trip. For many, the idea of driving over 600 miles in a day (alone, no less) is inconceivable. “What do you do for that many hours?” they wonder. Mostly I think. In fact, the first day of a road trip often flies by. I keep a mini legal pad by my side as I drive, and jot down ideas as they pop into my head. (Although I write without looking at the page, my writing is no more illegible than normal…)

On this day, much of my thinking revolved around how a projectile flung out of a rotating disk would behave. I spent hours thinking about this, and built the device after my return home. Hours spent puzzling about how it would behave in different situations has given me a deeper understanding of projectile motion, yet I have still more questions. Perhaps I can pursue these during next summer’s road trip…

Seven hours into my drive I stopped at a Valero gas station in Upstate New York. A television screen mounted in the gas pump played the news. Although this was not the first such television I’d seen, I was suddenly perplexed. Why was the television necessary? Was Valero concerned people needed to be entertained during the few minutes it took to fill a tank?

Last spring my wife, a friend of ours, and I attended author Erik Shonstrom’s talk about his new book Wild Curiosity: How to Unleash Creativity and Encourage Lifelong Wondering. In chapter 10 Shonstrom states that curiosity is “born from boredom”. He quotes psychologist Harry Fowler who said that boredom was one of the “prerequisites” to curiosity. “Boredom”, says Shonstrom, “has a way of first widening the net of our attention. We have the ability, because there’s nothing immediately claiming our attention, to notice things and to notice what we notice”. I love that! 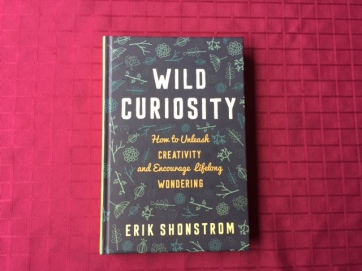 Later in the summer I’d flown to San Francisco. Andy, a childhood friend, and I were enjoying our annual weekend walking trip around the city. I brought up “boredom”. Throughout the summer I had been thinking about this idea. As I shared some opinions with Andy, I suggested that perhaps boredom wasn’t the best term for what I meant.

“I think boredom is the correct term and I agree with much of what you are saying,” Andy told me. Andy has no children, but observes how his friends raise their children. He compares what he sees to how we were raised in the 1970s. He believes many parents feel duty-bound to avoid letting their kids get bored. “When we were kids, our parents expected us to ‘go out and play’—to entertain ourselves. They felt no need to ensure that we were being entertained,” Andy pointed out.

I tend to agree with this. I remember no birthday parties growing up in which I had more than my family and perhaps one or two friends joining me to celebrate. I think most of my friends would say the same thing. (Either that or my friends didn’t invite me to their birthday parties…) Our son is now sixteen. Many years his friends celebrated birthdays with at least half a dozen friends, and a trip to some “entertainment venue”. Why has this changed? Is this necessarily bad? Do parents fear that a birthday without miniature golf or a bouncy house could result in—gasp!—a bored child? Oh my!

What is the longest drive a child today is expected to endure without a DVD playing or some other electronic device fighting for their attention? An hour? Half an hour? Couldn’t kids make up their own games to pass the time? Remember the alphabet game? Find the letters A to Z on road signs as one drives down the highway. How about the license plate game? Home made auto bingo? What about conversation with family members?

Our friend who joined us at the curiosity book talk has a sister who works at a nature center in Massachusetts. Several years ago, as part of an after school program, she worked at teaching students how to play outdoors! Wow.

“Less is more” is popular mantra in education. It refers to reducing the amount of content a teacher covers so that what is covered is done so thoroughly and deeply. “Less is more” also fits, I believe, with the amount of structured time kids should have.

But this is not the final word. What do you think?